Update: Pole-Attachment Legislation 'Killed': SCC Directed to Study Issue
“Customer-owners should know that we’re pleased with the outcome of our discussion with legislators about House Bill 1439,” says Mike Curtis, NOVEC’s vice president, public relations. “Traveling to Richmond was definitely well worth the trip.”

On Monday, Jan. 24, members of NOVEC’s board of directors, leadership team, and staff spent time in Richmond, Va., discussing HB 1439 with Northern Virginia legislators. As a result of these and earlier discussions, HB 1439 — the “pole-attachment bill” — was “killed” and all stakeholders agreed to a study to be conducted by the State Corporation Commission.

Curtis acknowledges, “We couldn't have done it alone. NOVEC’s customer-owners, and those of other electric cooperatives, provided a tremendous amount of grassroots support with their e-mails, phone calls and letters, and that always gets the attention of legislators. We really appreciate their willingness to get involved in this critical fight.”

The SCC study on pole-attachment rates is to be completed by Dec. 1, 2011. Legislators will then determine the next steps to be taken.

“These fees are negotiated by the parties and are based on the costs incurred in the design, construction, operation, and maintenance of the overhead electric distribution,” says Stan Feuerberg, NOVEC president and CEO.

“The telecom companies simply don’t want to pay a fair share of these costs. Reducing the pole attachment fees to subsidy levels amounts to a transfer of wealth from the not-for-profit co-op customer-owners to the stockholders of Comcast, Cox Communications, Time Warner, and other for-profit telecom companies.” 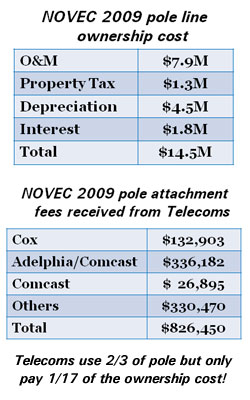 Bisson says, “Telecom corporations used two-thirds of each pole, but paid only one seventeenth of pole-line ownership costs.”

Jim Moxley, senior vice president, administration, substations, and telecommunications, notes that cable services — including TV, broadband Internet, and voice-over-Internet telephone services — are not regulated by the Virginia State Corporation Commission: “It’s ironic. It shouldn’t be one way. If the SCC starts regulating pole attachment fees for cooperatives, as the telecom industry wants, then we believe those telecom services should, in turn, be rate regulated.”

Feuerberg points out that telecom companies are not seeking lower fees to benefit people who live in the countryside. During an Oct. 28, 2010, meeting among electric cooperatives and members of the Virginia Cable Telecommunications Association, a VCTA member executive stated that broadband service would not be extended to Virginia’s rural customers even if electric cooperatives allowed free pole attachments.

NOVEC customer-owners can use the Virginia General Assembly's Who's My Legislator tool to contact their state delegates and senators and ask them to vote “no” on House Bill 1439, which would regulate pole attachment fees charged by the Commonwealth’s electric cooperatives.