Board of Directors Candidates

As cooperative members, NOVEC customers have the privilege and responsibility of electing representatives to the board of directors. Since directors serve four-year staggered terms, two or three positions are up for election each year. In 2016, members will elect directors to represent: District 4 — northwestern Prince William County, Sudley/Bull Run Mountain; and District 5 — Prince William County, south of Route 29 to Route 234.

William L. Parn is a senior engineer who graduated from George Mason University with a BS degree in computer science in 1991. Since then, he has designed and developed software and firmware for The MITRE Corporation, FGM Inc., Cryptek, Inc., Applied Security, Inc., and Oceans Edge Inc. His products have been used by air-traffic controllers, the U.S. Navy, and numerous government and commercial organizations. He has technical expertise in a number of computer languages, software, tools, hardware, and operating systems specializing in security and cryptology. When not writing code, the Haymarket resident has flown planes as an FAA Certified Private Pilot. He has also served on community and civic-organization boards as a director. He states, “I have a passion for addressing and resolving community issues.”

Parn says, “I have strong interests and passion for all forms of alternative-energy systems, such as solar, wind, fuel cells, and even near-zero-emission, high-tech, clean-burning coal systems. With that, I would like to help shape and continue NOVEC’s initiative to be a clean, responsible provider of energy.”

Parn states, “NOVEC has proven it goes above and beyond for its members by providing outstanding reliability and customer service.” But, he notes, “Even as great as NOVEC is there is always room for improvements. If you elect me I will be your voice ensuring NOVEC always puts you, the members, first. This is your electric co-op.”

Ann Wheeler, who is running for re-election, received a bachelor of science degree in mechanical engineering from Tufts University in Massachusetts in 1983. 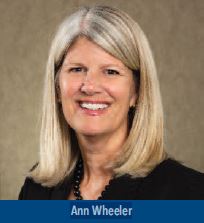 She earned a master of business administration degree from the University of Chicago in 1987. From 1983 to 1998, Wheeler worked in the energy industry for an electric utility and then for a national utility consulting firm. She held various positions ranging from large-customer field representative, analyst, and competitive-industry consultant to demand-side management project manager.

NOVEC members first elected Wheeler to the NOVEC Board of Directors in 2004. As a board member, she has served on the Bylaws, Audit, and Power Supply committees. She is currently on the Executive Committee as treasurer. Wheeler says she would like to continue serving on the board because, “It’s rewarding participating in an organization so vital to our community. I find it fulfilling to put to good use my background and expertise in the utility industry. It’s a joy to sit on the board of a company that is so well run on a day-to-day basis.” She would like to see the Co-op “continue to successfully navigate changes in the energy industry and continue to work on reducing its electric-supply costs.” Wheeler and her husband, John, live in Haymarket. They have two teenage daughters.

Wade C. House, who is running for re-election, is a native of Nokesville, Virginia. He graduated from Brentsville District High School. He received an applied science associate degree from Northern Virginia Community College in 1976.

House started volunteering as a firefighter in 1964 and has either been a volunteer or professional firefighter since then with the Nokesville, Prince William County, and City of Manassas fire departments. In 1981, House received the Fireman of the Year Award from the Manassas Volunteer Fire Company. In 2006, the City of Manassas awarded him the Volunteer of the Year Award and recognized him for his 30 years of leadership and service. House’s professional firefighting work continued in 2011 when he was appointed deputy fire and rescue chief for the City of Manassas.

From 1972 to 2007, House worked for APAC Atlantic, Inc., a large highway construction and materials manufacturing company. He retired as president of the Virginia division.

In 1993, NOVEC members elected House to the board of directors. Since then, he has served as secretary, treasurer, vice chairman, and beginning in 2008, chairman.

House says he would like to continue serving on the board because, “There are some important decisions the board will need to make concerning power supply and leadership due to retirements within the next two years. I feel the knowledge and experience I have gained over the years as a director, plus my business background and leadership in the Fire and Rescue Service, provide the background for me to make good decisions that will help keep NOVEC a strong, reliable, financially sound, and great cooperative.”

House and his wife, Nancy, live in Nokesville. They have two grown daughters.